As the sixth most commonly used verb in Spanish, poder is equivalent to the English verb ‘to be able to’ and can be used to talk about abilities, capabilities, and probabilities.

Today’s post joins a mini-series of posts I have written recently on some of Spanish’s most common and useful verbs including encontrar, recordar, faltar, gustar and querer.

Poder also falls into an important group: one of the first 10 Spanish words I recommend every beginning Spanish student start with.

The reason I suggest beginners start with this verb is because it can be used to minimise the challenge of learning Spanish verb conjugations in the early days.

That said, this post isn’t just for beginners. I’ll also be exploring how poder is used as a noun and I’ll take a look at one question that troubled me for quite some time:

What is the best translation of ‘it could be’: puede ser or podría ser?

In short, you can use the translation of “I want…”, “I like…” or “I can…” in combination with any verb in its infinitive form to create a compound phrase.

Here are a few examples:

Here are the present conjugations of poder:

Spend some time committing these conjugations to memory. These and the conjugations in the next section will be very helpful later.

Poder is very similar to the verb querer as you can use it in compound phrases and it has a very irregular past simple.

Here are the conjugations of poder in the past simple:

For a learn how and when to use the past simple in more detail, check out this article.

Poder as a noun

As a male noun, poder, is used to talk about power, strength or ability.

Often used in combination with the preposition de, you can use poder to describe someone’s abilities.

You can also use poder as a noun to describe the power that an individual or government has.

Poder as a verb

You will most likely find poder as a verb, and if you have been learning Spanish even for a little while you will probably have used it already in a sentence.

If you haven’t though, you will almost always find poder as the translation of “I can”, “you can”, “she can” etc.

Here are a few more examples to show poder in action as a verb:

English: I can’t go with you this weekend, I have another commitment.
Español: No puedo ir contigo este fin de semana, tengo otro compromiso.

English: I wanted to finish the race but I couldn’t.
Español: Yo quería terminar la carrera, pero no pude.

In Spanish, we can use poder to form hypotheses. This is often done by combining poder with the verb ser.

However, a challenge I’ve encountered is knowing whether the best translation of ‘could be’ is puede ser or podría ser.

But, the conditional mood in Spanish is reserved for more specific situations than in English.

Specifically, when it comes to talking about probability, we need the conditional mood in Spanish to talk about hypothetical situations that are extremely unlikely or impossible.

We can’t take salt out of a dish once it is already in there, so we need the conditional mood.

Conversely, if there is a discussion about the possibility of something real and very possible, we will either need the future tense or the present tense for the prediction.

Here are a few more examples:

Question: Do you think it is going to rain today?
Answer: It could be! (perhaps)
Español: ¡Puede ser!

Question: Is it a lie?
Answer: It could be the truth.
Español: Puede ser la verdad.

You should get to know how to use this verb as well as you can. This includes knowing the past conjugations, how to form phrases in the conditional mood and make comment on possibilities with ‘puede ser’.

Choose some phrases from this post, create some of your own and use them in a Spanish conversation when you get the opportunity to do so.

How else can you use the Spanish verb poder in a conversation? 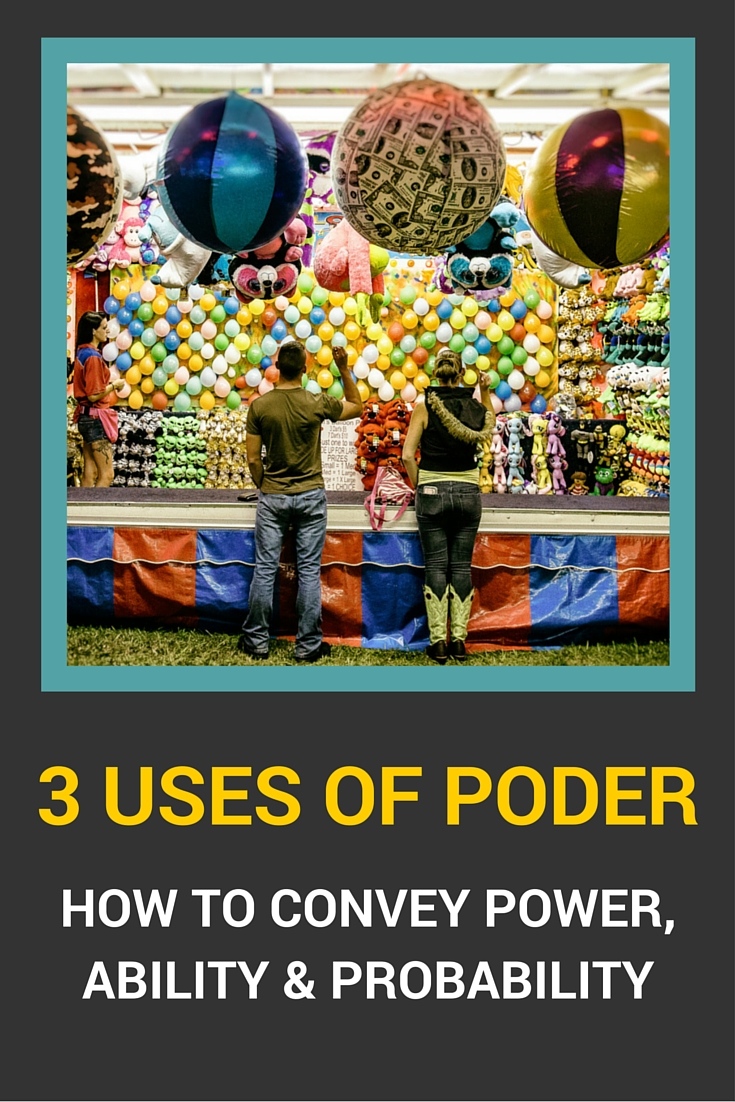