“One word that I frequently come across with Spanish speakers that I always miss the meaning behind is ‘faltar’. I do not know if this is common for others, but it’s an idea if you have not already touched on it.” – Real Fast Spanish Subscriber.

I have touched on this verb a few times before but I haven’t covered it in great depth.

One of the reasons the verb faltar is challenging is because you could confuse it with the related adjective falto and the female noun la falta.

So, to make sure you understand all three of these words well, I’m going to take you through some examples, some common phrases you are likely to hear and a couple of subtleties worth knowing.

Here is a quick summary of what’s you’ll find in this post:

As you read through the post, keep in mind that all three words associated with faltar relate to the idea of ‘missing something’.

5 Uses of the verb faltar

Here a few of the most common uses of the verb faltar. Take note of how you should use the verb in combination with the prepositions for each context.

1. Something does not exist where it should

This first use is for pointing out that something is missing but should really be there.

English: You haven’t collected all of the clothes, the socks are missing.
Español: No has recogido toda la ropa, faltan calcetines.

Note that this first use isn’t specifically for discussing when something could improve another thing if it was there. For example, ‘this soup is missing salt’—this idea with faltar is formed in a different way (see use 5. below).

2. To miss an important obligation

If you don’t turn up to an important place where you are obligated to be through rules or routine such as school, a meeting or an exercise class, then you could use faltar in combination with the preposition a.

English: I don’t like missing the gym.
Español: No me gusta faltar al gimnasio.

3. When something is missing from where it usually is

This use of faltar slightly contrasts use #1. It’s for when you are looking for something that should be there because you saw it there recently or you left it there. Or, more intensely, it’s for use when talking about a ‘missing person’. Note the use of the preposition de.

English: They are looking for their daughter who has been missing from home for a week.
Español: Buscan a su hija que falta de su casa desde hace una semana.

English: My wallet is missing from the place where I left it.
Español: Mi cartera falta del lugar donde la dejé.

4. Failure to fulfil a promise or complete what is expected

This use is for falling short on delivering what you owe or promised to do.

English: He promised to call me yesterday, but he broke his word.
Español: Me prometió que me llamaría ayer, pero faltó a su palabra.

English: He had to pay his debt last week, but he failed on his liability.
Español: Tenía que pagar su deuda la semana pasada, pero faltó a su obligación.

5. When something could improve something else if it was there

All uses of faltar indicate that something is missing but this last use is not about obligation or absolute necessity. This use is more about enhancing something through the addition of whatever is lacking.

Moreover, with this use, you can talk about something that needs to be improved without knowing what is missing. Here you can use the word algo to talk about the idea that ‘something’ is lacking. Or, in other words, you can use algo as a prompt to the person you are speaking with to help you brainstorm a possible solution.

This last use of faltar behaves like the verb gustar. This means you may need to reverse the sentence order and use an indirect object pronoun.

You need to think about the sentence structure like this: “To the item in question, something is missing.” Here are some examples:

English: The soup is lacking salt (to the soup salt is missing).
Español: A la sopa le falta sal.

English: The party is boring because it is missing something but I don’t know what it could be.
Español: La fiesta está aburrida porque le falta algo pero yo no sé lo que podría ser.

To reiterate, in these three examples, it is possible to continue without adding anything. This is contrasted against use 1. where we clearly know that the house could not go without a sofa or a table.

3 Examples with the adjective falto

Here are a few quick examples to show you the use of the adjective falto. Notice the adjective always needs to be combined with the preposition de.

3 Uses of the noun la falta

Here are some common uses of the female noun la falta not to be confused with the third person present conjugation of faltar and the female form of the adjective falto.

1. A lack or deprivation of something

This use of the noun is for representing a shortfall or scarcity of something.

English: The project won’t continue due to a lack of money.
Español: El proyecto no continúa por falta de dinero.

2. An infringement, breach or violation of a rule

This use of falta represents a mistake or violation of a rule or obligation.

3. A defect or imperfection

This use of falta could be used to describe a defect or fault of some kind.

English: I can’t use my computer today because it has a fault.
Español: No puedo usar mi ordenador porque tiene una falta.

English: There is a discount on this shirt because it has a fault (flaw) in the sleeve.
Español: Hay una rebaja en esta camisa porque tiene una falta en la manga.

Common phrases with the noun falta

There are two common phrases with falta worth practising. The first, with hacer, is particularly useful due to how frequently it occurs in spoken language.

1. In combination with the verb hacer (hacer falta)

When you combine the verb hacer with the noun falta you create a phrase that means ‘to need.’

In most instances, the phrase hacer falta is completely interchangeable with the verb necesitar. The only difference is that hacer falta expresses that you need something because it is missing (or you are out of it).

2. In combination with the verb echar (echar en falta)

When you combine the verb echar with the preposition en and the noun falta you create a phrase that means ‘to miss.’

One of the big challenges I had as a Spanish student when I was learning was understanding the difference between me falta and me hace falta.

I’ll say this first…if you mix up these two phrases, it isn’t really a big deal. Their meaning is closely aligned anyway.

But, if you do want to understand the nuance at play here, keep reading.

These ideas in Spanish would be:

As you can see both ideas express a shortfall in vocabulary.

The difference is that the first sentence could be seen as an observation where you may not want to improve your vocabulary.

In other words, you could add to the sentence and say “I lack a lot of vocabulary but it’s not a big deal!”.

That said, in the context that you’ll likely use this phrase, you’ll probably be indicating that you’re unhappy with your vocabulary and thus want to improve it.

In the second sentence, you are saying more explicitly that you need to improve. In other words, improvement is a desirable outcome and it has been clearly stated.

As you can see, the three words associated with faltar aren’t easy.

They are common, though, and should definitely be on your list of deliberate words for practising.

The important takeaway from this post is the questions you ask yourself around: who or what is missing the thing? What is missing? And how big a problem is the missing going to be?

Once you have clear answers to these three questions you narrow down the uses of these words and decide on a structure for expressing the idea of ‘missing’ in Spanish.

What other sentences can you form with faltar, falto and la falta? 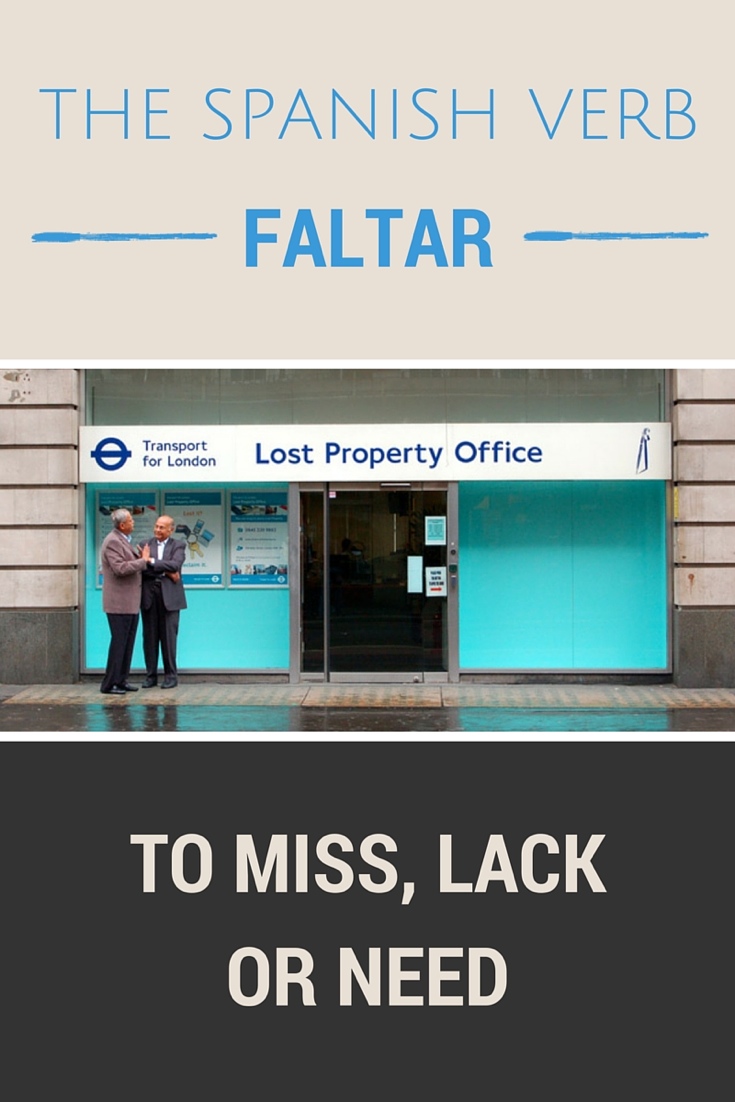