One of the best things about the Spanish conditional tense is that it is one of the easiest Spanish verb tenses to conjugate.

Also known as the simple conditional or condicional simple in Spanish, this tense is easier than other tenses because the conjugations for the regular ‘ar’, ‘er’ and ‘ir’ verbs are all exactly the same. Another bonus, there are only a small number of irregular verbs.

In addition to the convenience of the conjugations, the conditional tense in Spanish is used in a similar way to how we would express conditional ideas in English. Every time you think you could use a word like ‘would’, ‘could’ or ‘should’ in English, it is likely there is a Spanish equivalent.

But (naturally, there was a but coming), there are a few situations where English natives typically make mistakes with the Spanish conditional.

In this article, you will get an overview of how to form the Spanish conditional tense. You will learn about 5 common options for where and how you can use it.  You will also get to see a few examples of where English students typically make mistakes with this common tense.

Printable Version: Download this PDF version of the rules for the Spanish Conditional Tense to use as a study reference.

How to form the Spanish conditional tense

The Spanish conditional tense is formed in exactly the same way as the Spanish future simple tense.

You start with the infinitive form of the verb and then add a suffix depending on the person you are referring to.

As I mentioned earlier, one of the most convenient aspects of this tense is that conjugations for ‘ar’, ‘er’ and ‘ir’ verbs are exactly the same.

The only exceptions you need to be aware of are the irregulars verbs—you will learn about these in detail in the next section.

Here I have represented how to form the conditional tense in this graphic: 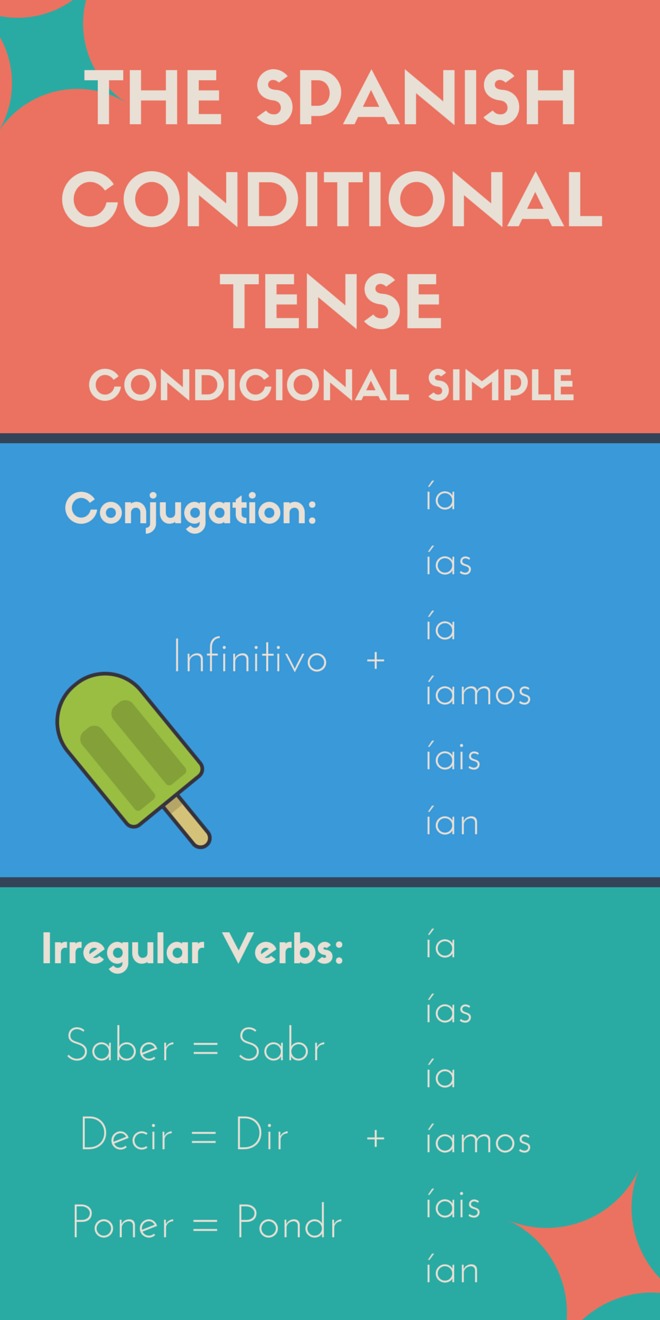 To give a quick example, you could start with a regular Spanish verb like:

Here pasar is the infinitive form. If you want to conjugate this verb, in say the third person, you simply have to add the ía ending as shown in the graphic above:

This in English would mean ‘she would pass’.

Here you can see a few more examples the regular conditional conjugations in action:

There are only 12 irregular verbs for the conditional tense in Spanish.

As the Spanish future tense is formed in exactly the same way as the Spanish conditional tense, these 12 irregular verbs apply equally to both tenses.

The 12 irregular verbs for the two tenses and the associated prefix are:

Here are a few examples of the irregular conditional verbs in action:

Now that you know how to conjugate the conditional tense, let’s take a look at a few situations where you can use it.

Use #1 – To express desires for the future

One of the most common uses of the Spanish conditional tense is for expressing desires for the future.

In English, you would use the phrase ‘I would like’ to express a preference for what you would want to happen in the future. In Spanish, you can use the conditional form of ‘gustar’, ‘desear’ or ‘querer’ to express a similar idea.

I would like to live for a year in Argentina.
Me gustaría vivir durante un año en Argentina.

I would like to find a new job.
Desearía encontrar un nuevo trabajo.

I would like to visit every country in the world.
Querría visitar todos los países del mundo.

What to look out for

You need to be careful with the use of the conditional tense when asking for things in say a restaurant or a shop. In English, we ask for things as follows:

I would like to have a glass of water.

When I was in Sevilla I went into a tapas bar and asked for a ‘tortilla’ (Spanish omelette) as follows:

The guy behind the bar looked at me with bewilderment.

Apart from my errant use the use of the verb ‘tener’ in this context—it may appear as more a philosophical question in Spanish than anything else (can I actually ‘have’ a tortilla?)—the conditional tense is only really used in the present for expressing politeness.

While you could say ‘querría una tortilla‘ it is much better to use the conditional tense for desires that are a little more far-reaching than a plate of food just over the barman’s shoulder.

In contrast to the previous point about asking for food in a restaurant, there are, of course, times that call for politeness.

In general, the Spanish language tends to be far more direct than English. But, there still remain situations such as speaking to a police officer, a doctor or asking for a big favor from a friend that require a touch of courtesy.

Something else to consider is the use of the usted form of the verb when you want to be polite. Simply using the usted form in Spanish expresses an idea in a more formal way. You can, thus, and probably should combine the usted form with the conditional tense.

The following examples show how you can ask for something politely in Spanish when the time calls for it:

Could you help me this weekend?
¿Me podría ayudar este fin de semana?

Would you have any information about my son’s case?
¿Tendría alguna información sobre el caso de mi hijo?

Could you give me a medical certificate for my work?
¿Me haría usted un justificante médico para mi trabajo?

Another common use of the Spanish conditional tense is for giving advice.

There are a few common structures in Spanish that set up the use of this tense for advice, these include:

The translation of these structures into English are all “if I were you, I would …”. You use the conditional tense here because you are a referring to a conditional situation—if you were the other person.

Alternatively, you can use the conditional tense to give advice in a more direct way as follows:

These two examples translate to English as ‘you should…’ or ‘you could…’.

Let’s have a look at a few examples:

Problem: You are feeling sick.
Advice: If I were you, I would spend all day in bed.
Consejo: Yo que tú, pasaría todo el día en la cama.

Problem: You are throwing a party and don’t know what to cook.
Advice: If I were you, I would make a Spanish omelette and a paella.
Consejo: Yo en tu lugar, haría una tortilla y una paella.

Problem: Your boyfriend’s birthday is coming up and you don’t know what to buy him.
Advice: You could look on the internet to find some ideas.
Consejo: Podrías buscar en internet para encontrar algunas ideas.

Use #4 – For guessing what might have happened in the past

In contrast to the previous three uses, you will find some variation throughout the Spanish-speaking world for this 4th use for speculating about the past.

This is because the choice of Spanish past tense can vary between Spanish-speaking countries.

And, since the choice between the present perfect and simple past varies, so too does the use of the conditional mood for guessing about what might have happened in the past.

You may find all three of these possible answers: the conditional (estaría), the future perfect (habrá estado) or a compound phrase with haber (podía haber estado) depending on the Spanish-speaking country. And this isn’t just a Spain vs Latin America choice, you will find the decision varies between countries within Latin America.

So, for this 4th use, you may have to run it by some locals to see which is the most common option in the Spanish-speaking country you are in. Personally, there are a few things like this that I have to adjust to when I’m speaking with different Spanish natives from different countries.

Here is another example where again the different options could apply:

Question: Do you know why Maria was in a bad mood last week?
Pregunta: ¿Sabes por qué María estuvo de mal humor la semana pasada?
Hypothesis: I’m not sure, I suppose she would have been very busy.
Hipótesis: No estoy seguro, supongo que estaría muy ocupada.

Do you like to lament the past? I know I do from time to time (or more than I would like to admit). If you want to lament an action that happened in the past—this includes doing more or less of something—you can use the following structure:

But, note that similar to use #4, there could be some variation for this use between Spanish-speaking countries. This is again due to the variation for the past tense use between Spanish-speaking countries. And like use #4, we could find the future perfect or a compound tense in place of the examples with the conditional mood below.

Let’s look at a few actions:

Frustration: Why did I eat so much food!
Frustración: ¡Por qué comería tanta comida!

Possible errors with the conditional tense

If I had more time, I would travel more frequently.

The temptation is to translate this sentence as follows:

This isn’t correct. Certainly, if you did say this sentence in this way most Spanish natives would know exactly what you mean. But, you can improve the translation.

Notice the conjugation of ‘have’ in the English sentence—’If I had more time’. It is formed in the past.

Well, the same thing happens in Spanish as well:

‘Tuviera’ is actually the imperfect subjunctive tense which is an advanced grammar topic. It is a topic that you should get to eventually but don’t let it distract you. I put it here to show how the conditional is used correctly in Spanish conditional sentences.

The other way to form Spanish conditional sentences is with a conditional statement in the present. For example, starting with the English sentence:

If we leave now, we will arrive on time.

The temptation here, is to translate the sentence to Spanish as follows:

Here the use of the conditional Spanish tense is incorrect. It is never used with present conditional sentence. It is better to translate this sentence using the the Spanish future simple tense:

The Spanish conditional tense is easy to conjugate and has relatively few irregular verbs. Your challenge is to remember when and where to use it correctly.

Choose a few examples from today’s post, make a few of your own sentences and then try them out on some Spanish natives. The best way to learn and make something stick in your memory is to use it.

How else could you use the Spanish conditional tense?

How to Use the Spanish Conditional Tense PDF