If you have ever been curious about how se can appear in multiple contexts, you’ll see in this post how you can use it in sentences to reduce blame, to hide guilty parties and to make generalisations.

Not to be confused with the conjugation sé (I know) from saber or the imperative command sé (be…!) from ser, the pronoun se is an extremely versatile Spanish word.

In this post, I’ll share the 4 uses of the Spanish pronoun se to ensure you are never puzzled by this word again.

Printable Version: Download this PDF version of the uses of ‘se’ to use as a study reference.

Use 1. In pronominal verbs

In Spanish, two types of verbs are categorised as pronominal: reflexive verbs and reciprocal verbs. Often the term reflexive gets used to talk about both types of verbs.

But, in reality, reflexive verbs and reciprocal verbs can often vary slightly in meaning.

That said, in this article, the reason I have categorised reflexive and reciprocal verbs together is because the pronoun se is used in the same way for both types of verbs in terms of sentence structure and grammar.

In these verbs, the pronoun se is used to indicate that the object and the subject of the sentence are the same.

I’ll take you through some examples for each type of pronominal verb.

English: He got himself to bed at eleven last night.
Español: Él se acostó a las once anoche.

In both of these examples, if you removed the pronoun se, the sentences would be incomplete.

For example, if you said the second sentence without the se:

The listener would ask the question ‘washed what?’.

You could say ‘their clothes’:

But, if you meant to say themselves, you need to ensure you include the pronoun se.

In contrast to reflexive sentences, in reciprocal sentences, the object and the subject of the sentence are typically two different people doing the same thing to each other. Here are a few examples:

English: They kissed each other.
Español: Ellos se besaron.

English: They see each other every Wednesday.
Español: Se ven cada miércoles.

English: They woke each other up.
Español: Se despertaron el uno al otro.

Again, if you removed the pronoun se, these sentences wouldn’t make sense. If you said ellos besaron, the person you are speaking with would ask ‘who did they kiss?’.

Before moving on, I’ll also point out that the phrase “el uno al otro” means “each other”. This phrase gives you a hint that the sentence is most likely reciprocal and will need the word se included before the conjugated verb.

Use 2. When combining direct and indirect object pronouns

In Spanish, the words lo, la, los and las can be used to replace direct objects. A quick example:

English: I have the keys.
Español: Tengo las llaves.

This can be shortened to:

English: I have them.
Español: Las tengo.

You can then use the words le and les to substitute for indirect objects. For example:

English: I didn’t say anything to my parents.
Español: No dije nada a mis padres.

This can be shortened to:

English: I didn’t say anything to them.
Español: Yo no les dije nada.

The next step is to combine direct and indirect objects, but there is a problem that occurs.

If you start with this sentence:

English: I gave the books to my parents.
Español: Di los libros a mis padres.

English: I gave them to them.
Español: di.

But, les los isn’t correct. Why?

Hopefully, you can see that se actually makes life easier for you here.

Since the point of direct and indirect pronouns is to make life easy, the pronoun se is used to replace both le and les in these types of sentences to avoid a tongue twister.

Here is a summary of how you should replace le and les with se in sentences with a combination of direct and indirect object pronouns:

English: She brought it for them (it is a book).
Español: Ella se lo trajo.

English: I bought them for her (they are flowers).
Español: Se las compré.

Use 3. The impersonal se

Similar to how reflexive and reciprocal verbs are sometimes referred to as the same, so too are impersonal and passive verbs.

I have incorrectly referred to impersonal verbs as passive verbs a number of times on the blog and podcast. But, like pronominal verbs, the name doesn’t really matter.

What does matter is that you recognise the behaviour and role of the pronoun se in these sentences.

For now, an impersonal sentence is a sentence where the subject is completely generalised. This means you could talk about rules or make comment on the general behaviour of people in your city or country.

They say that you should eat vegetables every day.

Here, the idea of ‘one’ or ‘they’ isn’t anybody specific.

When you form these ideas in Spanish, the word se replaces ‘one’ or ‘they’ from English. Here are a few examples:

Last week I wrote an article about the Spanish verb encontrar. In that article, I gave the following example:

Another (and more common) way to ask this question is by using the impersonal se:

This question is now no longer about you or the person you are speaking with but anybody who may want to find tapas in the neighbourhood.

Use 4. The passive se

In contrast to the impersonal se, the passive se is used when the subject of the sentence is someone or something specific but is omitted from the sentence for various reasons.

Also, if you omitted the se from this example, it would sound like “the problems were solving (something else)” which doesn’t make sense in this context. Particularly, since there isn’t another object in the sentence.

When you forget something in Spanish, you often do it with a passive construction to highlight that you forgot by accident. Similarly, you could say:

In both of these examples, the speaker is trying to reduce the blame for their mistake. The best literal translations would be ‘the tickets were forgotten to me’ and ‘the computer was broken to me’.

In fact, if you said:

In Spanish, this could be interpreted that you broke the computer on purpose (or through pretty heavy negligence).

As you can see, the Spanish pronoun se is not straightforward.

The best way to get used to these sentences is to put them into action.

This week, construct some sentences using the impersonal se about how things are done in general in your country.

Also, try using the passive se to talk about something important that happened in your life recently and see if you can omit the subject of the sentence.

How else can you use the pronoun se in a Spanish sentence? 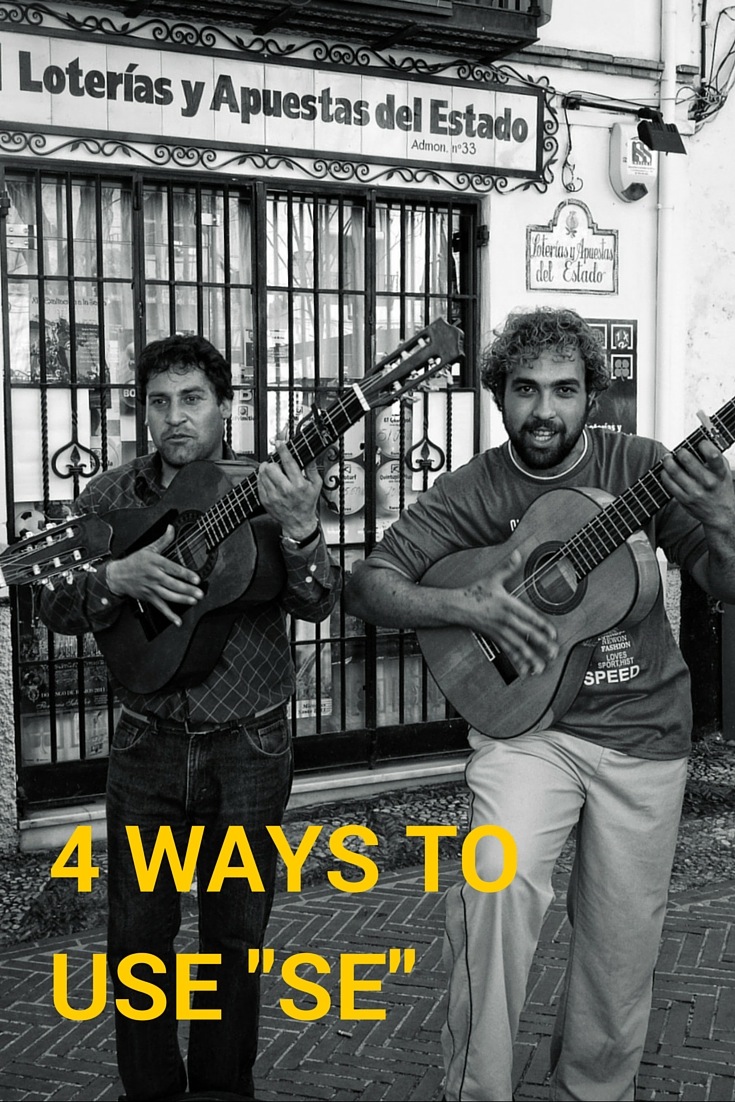 4 Ways to Use “Se” to Express Yourself More Broadly PDF