How do you know when you should include the Spanish word for it—lo—in a sentence?

This question is one I have found myself asking often. What this question is really asking is if the Spanish verb you are about to use is transitive or not.

In Spanish, just like English, there are intransitive and transitive verbs. Of course, not all verbs fall into one category or the other. A lot of verbs behave in both ways depending on the context.

In fact, there are almost no verbs that are purely one way or the other.

This made this post difficult to write. But the way I have approached it is to consider how each verb is used the majority of the time. With that, I have then also included any exceptions if common ones exist.

What is a transitive verb?

A simple sentence in English follows the structure ‘subject-verb-object’. For example:

Here the Laura is the subject, the verb is hitting and the object is the ball.

A transitive verb is a type of verb that must have at least one object in the sentence.

An example transitive verb from English is the verb ‘to have’.  In English, you can’t say:

It sounds strange. You need to include an object:

I have a question.

Conveniently, the Spanish equivalent of ‘to have’, tener, is also transitive. These sentences in Spanish would be:

English: I have it.
Español: Lo tengo.

English: I have a question.
Español: Tengo una pregunta.

Whenever you encounter a Spanish transitive verb, you need to remember that the verb must have an object. If you forget the object it will sound strange to a Spanish native, kind of like how ‘I have’ sounds to you.

In contrast, an intransitive verb is a verb that is formed without an object. An example that works in both Spanish and English is the verb llegar ‘to arrive’:

The most common Spanish transitive verbs

I’m a huge believer that knowing word frequency when studying a language plays an important role in reducing the time required to learn the language.

I have written a lot on the topic including other posts like this one such as ‘the most commonly occurring verbs like gustar‘. And it’s the main reason I wrote this post.

So, here is a list of the most common Spanish transitive verbs in order of frequency use in the language:

As I mentioned earlier, not all of these verbs are strictly transitive. More on this in the next section.

How to use these Spanish transitive verbs in a sentence

In this section, you’ll see how to put together Spanish sentences with transitive verbs.

But you’ll also see intransitive exceptions where they commonly occur.

Choose a number of these examples for practicing to make sure you commit them to memory. Create your own sentences then try them out in your next Spanish conversation.

Tener is the most commonly occurring transitive verb. You have already seen tener in action above. Here are a few more examples:

English: She has a dog.
Español: Ella tiene un perro.

Similar to English, when you ‘say’ something in Spanish you mostly have to include what is being said even if it is nothing.

English: He said nothing.
Español: No dijo nada.

This last example includes the present perfect tense, for a refresher check out this article.

Decir has a few colloquial intransitive exceptions. I’ll include here one of my favorite phrases in Spanish:

The word di is the imperative command of decir. When you say dime you are commanding someone to say what they are thinking. But, it is said with much more care and love than the English equivalent. This is one of the reasons I love this phrase so much.

In English, if someone says ‘tell me!’, I would consider it kind of rude. In contrast when someone says dime in Spanish it can be a warm-hearted invitation to speak.

If you are in a Spanish classroom and you throw your hand up with a question, you will likely hear the teacher say ‘dime, dime’ with such generosity that it makes you want to ask another question straight away.

Saber can be a little tricky because one exception, in particular, occurs so readily that you forget that the verb is actually supposed to be transitive.

English: Sorry, I don’t know your name (how you are called).
Español: Lo siento, no sé cómo te llamas.

Over time English phrases and expressions have crept into the everyday Spanish vernacular. This is may apply to this regularly occurring, technically incorrect, use of saber.

This question, as a speech crutch to confirm if someone agrees or is listening, is very common. Feel free to use it just as you would in English. But, simply note that the question should technically include an object, ¿lo sabes?

I recently covered querer in a lot more detail here.

Here it makes the list as the fourth most common transitive verb and rarely occurs in an intransitive form.

English: I owe him everything.
Español: A él le debo todo.

English: I owe it to her.
Español: Se lo debo a ella.

Note this verb is often used to express obligation in the conditional form.

The next transitive verb is poner, you can listen to a podcast on poner here.

English: I put his money on the table and left.
Español: Puse su dinero en la mesa y me fui.

Outside the context of religious or faith-based belief, creer is a transitive verb.

English: I don’t believe it.
Español: No me lo creo.

English: I think a mistake is being made.
Español: Creo que se equivoca.

English: I think this is the most important thing to do.
Español: Creo que este es lo más importante hacer.

In the context of faith-based belief, creer is intransitive and used in combination with the preposition en.

English: I believe in the afterlife.
Español: Yo creo en el más allá.

The verb llevar can be used in a lot of different contexts but what they do have in common is they are all transitive. Learn more about llevar here.

English: We are going to bring a salad to the dinner.
Español: Vamos a llevar una ensalada a la cena.

In the context of ‘leaving’ something somewhere, dejar is transitive.

In the context of stopping an action, dejar is intransitive and used in combination with the preposition de.

The next transitive verb is seguir which means to ‘follow something’.

English: He is going to follow your advice.
Español: Él va a seguir tu consejo.

When you find something in Spanish remember to include the object of the sentence.

English: I couldn’t find it.
Español: No lo pude encontrar.

English: In the end we found someone that could help us.
Español: Al final, encontramos a alguien que nos puede ayudar.

The next transitive verb is practicar.

English: His plan is to practice it for an hour every day.
Español: Su plan es practicarlo durante una hora todos los días.

In the pursuit of improvement, colloquially, practicar can be used as an intransitive verb.

English: You have to practice more if you want to improve.
Español: Tienes que practicar más si quieres mejorar.

In Spanish, when you help, you need to help someone or something. Also when you refer to the thing you are helping you often need to refer to it with the preposition a.

English: Can you help me clean the kitchen.
Español: ¿Me puedes ayudar a limpiar la cocina?

English: We donated money to help the cause.
Español: Donamos dinero para ayudar a la causa.

Despite being technically considered a transitive verb, ayudar is commonly used to talk about help without reference to an object.

Often confused with saber, conocer is used to in the context of getting familiar with either someone or something. Learn more about these two verbs in contrast here. Also when you need to refer knowing someone you have to use the preposition a.

English: I have to get to know this city.
Español: Tengo que conocer esta ciudad.

Used in the context of taking medicine or drinking something, tomar is the last high use transitive verb for the post.

English: I feel so sick and it is difficult to take these pills.
Español: Me siento tan mal y me cuesta tomar estas pastillas.

Being able to use Spanish transitive verbs in combination with objects and prepositions correctly is a fundamental skill. Time spent on the material in this post will pay you back dividends in the long run.

I recommend you choose a few of these verbs to use and practice in your next Spanish conversation. When you do, take note of the combination of prepositions, direct objects, and the order they should come in a sentence. 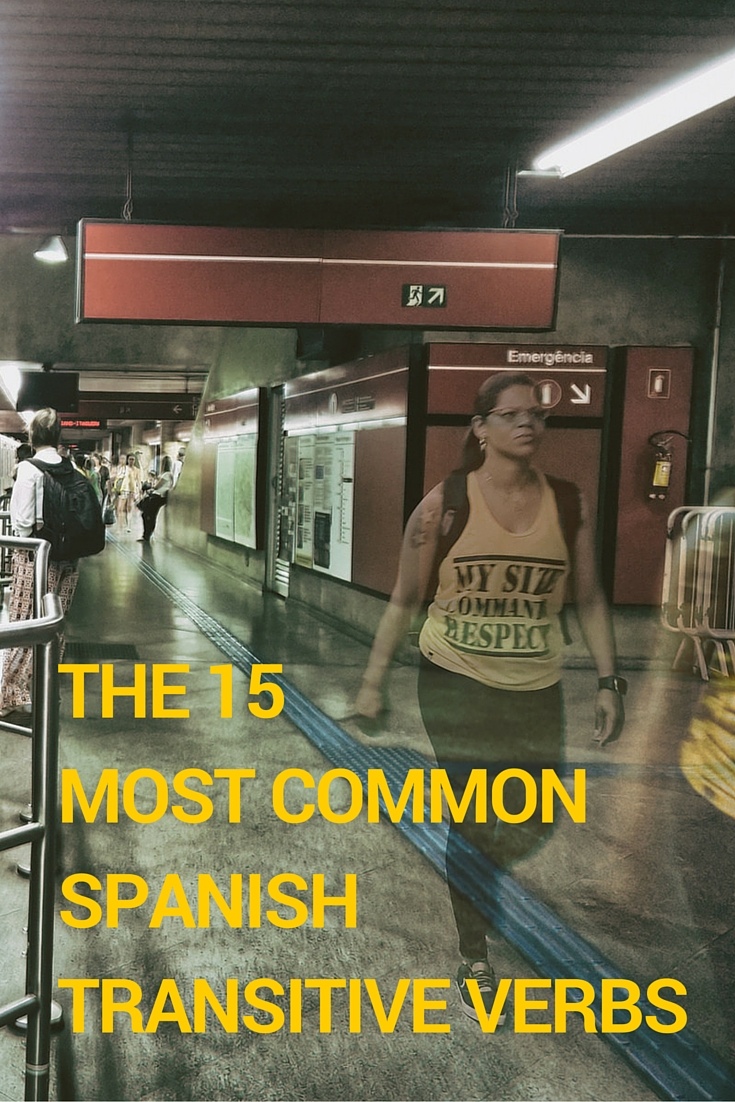