What is the difference between tan and tanto? And in what situations should you use each of these Spanish words?

Printable Version: Download this PDF version of the rules for tan vs tanto to use as a study reference.

I’ll start by talking about the direct comparison between tan and tanto.

Here are a few simple examples with tan (note these sentences are incomplete):

Here are a few simple examples with tanto:

English: …as much of a hurry…
Español: …tanta prisa…

Hopefully, you’ll have also noticed that tanto behaves like most other Spanish adjectives, and agrees in gender and in number with the noun it modifies.

In the next section, you’ll see how we can use tan and tanto for making comparisons of equality.

Comparisons of equality with tan and tanto

In English you can make a comparison of equality with the following phrase:

Since tan goes with adjectives and tanto goes with nouns, the equivalent structure to the above in Spanish is:

Here are some comparisons using tan (with adjectives):

English: After six months, I’m still not as accustomed to life here as I had hoped.
Español: Después de seis meses, todavía no estoy tan acostumbrado a la vida aquí como yo esperaba.

English: I have not seen as many movies as Maria.
Español: No he visto tantas películas como María.

English: You have as much experience as your colleagues.
Español: Usted tiene tanta experiencia como sus compañeros.

English: We have as many problems as our neighbours.
Español: Tenemos tantos problemas como nuestros vecinos.

There is one other structure that you can use with tanto to make comparisons of equality. It looks like this:

English: No one eats as much as Carlos.
Español: Nadie come tanto como Carlos.

English: I don’t travel as much as I want.
Español: No viajo tanto como quiero.

Conclusions with tan and tanto

Another use of tan and tanto is for making conclusions, deductions, or even hyperbole if the time calls for it. In English, the most familiar structure would be:

The equivalent structure to above in Spanish for conclusions is:

The key change you have to make to go from comparisons to deductions is to replace the como with a que.

Here are some conclusions using tan:

English: It’s so expensive that we can’t allow ourselves to buy it.
Español: Es tan caro que no nos podemos permitir comprarlo.

English: The movie was so boring that I had to leave early (before the end).
Español: La película era tan aburrida que tuve que irme antes.

English: I was so worried that I couldn’t sleep all night.
Español: Estaba tan preocupado que no pude dormir toda la noche.

English: There were so many people at the party that we had to leave.
Español: Había tanta gente en la fiesta que tuvimos que salir.

English: They made so many changes at the school that I didn’t recognise it.
Español: Ellos hicieron tantos cambios en la escuela que no la reconocí.

English: I’m so hungry that I could eat a horse.
Español: Tengo tanta hambre que me comería un elefante.

In English when we are hungry we eat horses; in Spanish, they eat elephants. There is potentially a joke here about who is hungrier but I’ll leave it up to your imagination.

The last use of tanto is for making approximations.

A common way to make an approximation in Spanish is with ‘más o menos‘. For example:

The way you use tanto for approximations is slightly different. Here are two examples with age and time:

English: He returned home at some (random) hour in the morning.
Español: Volvió a casa a las tantas de la mañana.

English: He is in his forties (forty-something).
Español: Tiene cuarenta y tantos años.

Here you can see the translation is ‘he is forty-something’ or more literally ‘he is forty and so many years’.

Muy vs tan and mucho vs tanto

You have already seen above how tan and tanto can be used to make comparisons and conclusions. The key reason you would use muy or mucho is to make a general superlative statement without a direct comparison.

For example, you could say:

Or you could make a comparison with tan:

Similarly, with mucho, you may want to make a superlative statement:

Or as a conclusion, you could say:

English: Alba has so much money that she can buy a boat.
Español: Alba tiene tanto dinero que puede comprar un barco.

The words muy, mucho, tan and tanto take a little practice to master. As with any other Spanish topic, the trick is to use it and reinforce it in your mind as often as you can.

Try to form some conclusions this week using these Spanish words. How difficult is Spanish? “It’s as difficult as…” Or how important is this topic? “It’s as important as…”

How else can you use tan and tanto in Spanish? 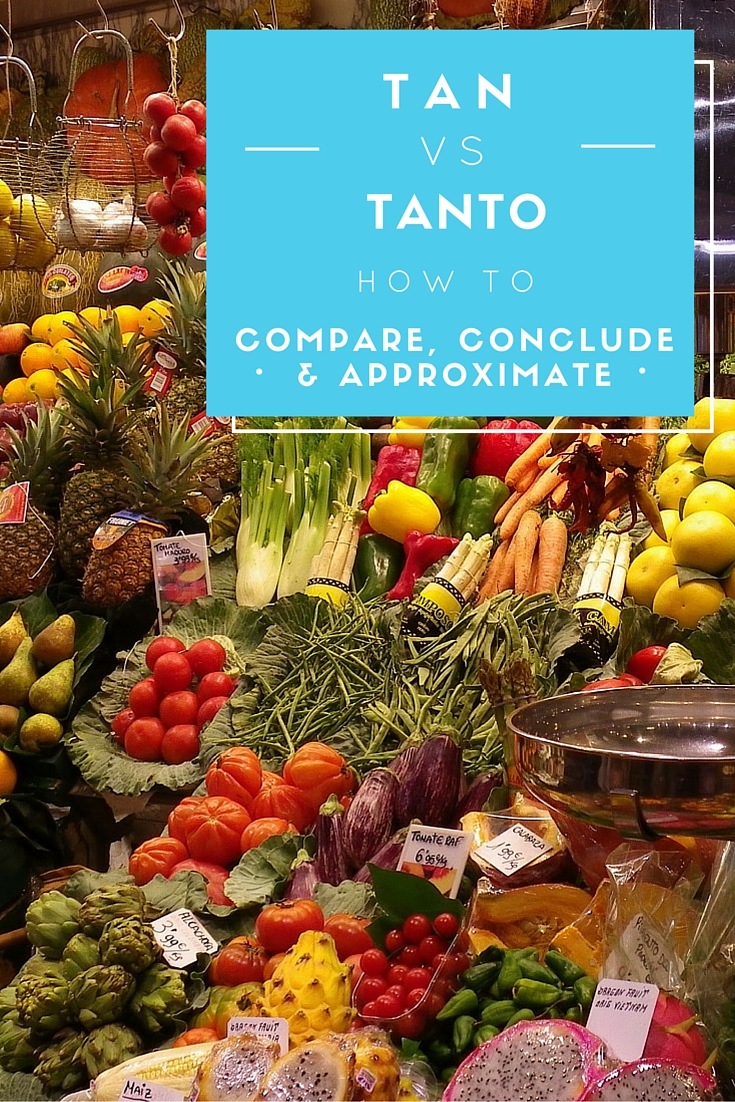 Tan vs Tanto – How to Compare, Conclude & Approximate PDF