The Spanish words sino and pero are troublesome. They aren’t really interchangeable, yet the natural temptation is to use pero more often than you should when speaking Spanish.

These two Spanish words are also difficult to explain. So I’m not going to explain how they are used but rather demonstrate their use through examples.

Of course, that last sentence was a bit of a white lie (mentira piadosa), I will talk about the differences. But, I wanted to take an opportunity to provide an example of an English sentence where we could use sino if the sentence was translated into Spanish.

So, what you really need to look for is the phrase “but rather”. Whenever this phrase comes up in English, you can use sino when you are expressing the sentence in Spanish.

But, of course, there is more to the story. So let’s take a closer look.

Both pero and sino are conjunctions. That means we can use both to connect words, phrases or clauses in a sentence. Some examples of other conjunctions in English include if, but, then, and, or, yet…etc.

In English, the conjunction ‘but’ is used to contrast ideas or point out exceptions. For example:

The challenge here is that in Spanish one of these sentences uses pero and the other sino. Can you guess which is which?

Sino and pero can be the translation of ‘but’, however sino has a more nuanced use.

You need to use sino in the following scenario:

And, the most important thing with the use of sino is that ‘this’ and ‘that’ are contrasting, related ideas.

In the first example, paella is the exception out of all Spanish food. Yes, paella and Spanish food are related but they are not contrasting ideas.

In the second example, meat and fish are contrasting and related items.

The translations of the above sentences are as follows:

English: I don’t like Spanish food, but I do like paella.
Español: No me gusta la comida española, pero me gusta la paella.

English: He doesn’t like meat, but does like fish.
Español: A él no le gusta la carne, sino el pescado.

Something else to consider on the decision between sino and pero, if either of these sentences started with a positive clause, like:

Then you can’t use sino, it has to be pero. In other words, sino is used to contrast first a negative clause against a positive clause second.

Let’s look at some examples.

You need to use pero in the following example because the first clause is positive (tengo que):

English: I have to get up early but I don’t want to.
Español: Tengo que levantarme muy pronto pero no quiero.

Here is an example with a negative clause to start but pero has to be used because the first and second clauses are not contrasting.

English: I haven’t been to Barcelona but I like Catalonia a lot.
Español: No he estado en Barcelona pero me gusta mucho Cataluña.

Another example with a negative starting clause but again the two clauses aren’t comparable.

English: This topic is not easy but is interesting.
Español: Este tema no es fácil, pero interesante.

Here I have changed the above example with Barcelona to create a sentence using sino. Imagine that you went to Madrid for the weekend and someone asked you if you went to Barcelona. You could respond as follows:

English: I wasn’t in Barcelona but rather in Madrid.
Español: No estuve en Barcelona sino en Madrid.

In the following example, the first clause is negative and azul and rojo are related ideas as they are contrasting colours.

This last example is slightly different but again demonstrates the pattern: related and contrasting. Use this if you want to pin a misdemeanour on someone else.

English: I didn’t do it, but rather Carlos did it.
Español: No lo hice, sino Carlos.

The major difference between sino and sino que is the clause after the que has to have a separately conjugated verb. The previous rules still apply.

English: I didn’t go to see them but rather they came to see me.
Español: Yo no fui a verlos sino que ellos vinieron a verme.

English: I don’t like to swim at the beach but rather I prefer to swim in a pool.
Español: No me gusta nadar en la playa, sino que prefiero nadar en una piscina.

Now it’s time to test your knowledge and take what you have learnt in this post and use it in a Spanish conversation either in a language exchange or with a Spanish teacher.

The difference between pero and sino is subtle, you can lock in your understanding by testing yourself when you next get the opportunity.

How else can you use pero, sino or sino que in a Spanish sentence? 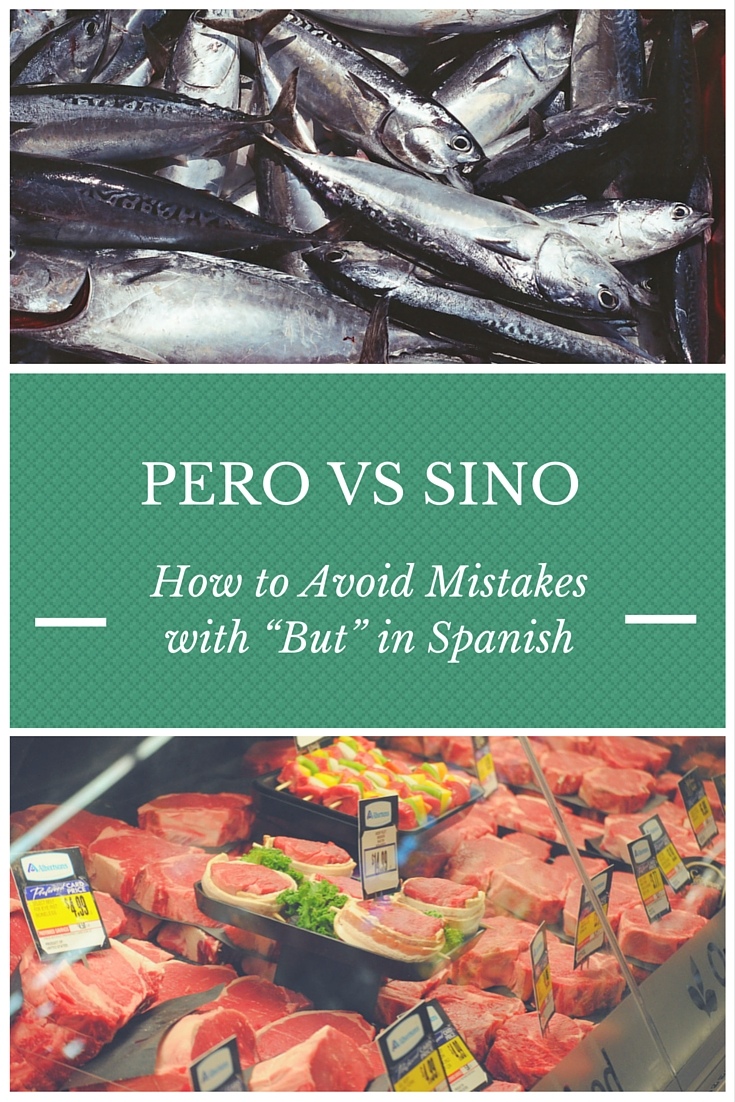