﻿The Spanish past perfect is definitely not the easiest tense to use.

This is because you’ll often have to use the past perfect with other tenses such as the past simple or past imperfect.

You may also be tempted to use the present perfect when you really should be using the past perfect.

But, that doesn’t mean you can’t quickly learn how to use this tense properly.

In fact, you’ll only need to focus on a few really common phrases to get a strong feel for this tense.

Moreover, while researching this post I realised that one Spanish phrase conjugated in the past perfect occurs more frequently than ‘otra vez‘ or ‘se llama‘ in conversational Spanish.

So, in today’s post, you’ll learn when to use the Spanish past perfect tense, how to form it, and I’ll show you a few key phrases that will help you learn this tense quickly.

Printable Version: Download this PDF version of the rules for the Past Perfect Tense to use as a study reference.

A quick introduction to the past perfect tense

So what is the past perfect tense in Spanish used for?

The past perfect tense, also known as el pretérito pluscuamperfecto, is really useful for describing a sequence of events in the past.

In other words, this tense is great for telling stories in Spanish.

…well, this is because the past perfect tense describes an event that occurs before another event.

I had already eaten when you arrived.

I had already woken up when my alarm sounded.

I had already finished my homework when my dad asked me to do it.

As you can see, the word ‘already’ is important here because it tells you that one event is finished before another event starts.

For any event that finished prior to another event, you’ll need the Spanish past perfect to describe it.

Let’s see how to form this tense.

How to form the past perfect tense

If you want to conjugate a verb in the the past perfect tense, you need two things: a past participle and a conjugation of the verb haber in the past imperfect tense.

Here is a list of the past imperfect conjugations of haber:

Next, you need to form a past participle out of the verb you want to use.

If you can’t remember how to form a past participle check out this post.

When to use the Spanish past perfect tense

The next thing you need to think about is finding the right time to throw the Spanish past perfect into conversation.

Here’s a hint from English. Whenever an idea looks as follows:

Something had happened prior to something else

You need to use the past perfect tense for the translation in Spanish.

The key word is ‘had’. It implies an action was completed prior to another action in the past.

Another common word you’ll find with this tense is ‘already’.

I had already done something when something else occurred.

Here is an example:

English: I had already spoken with him before speaking with her.
Español: Ya había hablado con él antes de hablar con ella.

In this example, this second verb (hablar) isn’t conjugated in the past but the ‘antes de‘ and the past perfect implies the sequence occurred before the present moment.

Having said that, you can also use the past perfect tense for actions that are happening in the present moment. For example:

This last example can be a little more hazardous because the English sentence doesn’t have a ‘had’ in it.

That said, it is okay to translate the last part in the above example to the present perfect in Spanish as well.

I will show you some more examples below. But first, I want to show you the most frequently used verbs in this tense.

The most commonly occurring verbs in the past perfect

In order to work out the most commonly occurring conjugated verbs in this tense I used a set of data called n-grams for the Spanish language.

For a more detailed explanation of n-grams and how they are used to determine frequency, check out how I used 2-grams in Spanish to work out the most commonly occurring verbs like gustar.

I mentioned in the introduction there is a Spanish phrase that occurs more frequently than ‘otra vez‘ and ‘se llama‘. This is ‘había sido‘ which is the verb ser in this past perfect.

I’m still a little shocked at how commonly this phrase occurs but I’ll show you below a few examples to hint at why this is maybe the case.

But in the meantime, the results of the frequency analysis for the conjugated verbs in the past perfect tense in order are as follows:

Something to consider with the results of 2-gram review is I don’t know whether the había is the first person or the third person.

The fact that the first and third person are the same in many verb conjugations in Spanish means that it won’t show up in the results from the 2-gram study.

But either way, the verb is still appearing in the past perfect, whether it’s first or third is probably not important.

Examples for the past perfect tense

This part of the post is where you need to dissect, analyse and understand what is going on.

Choose some options from below and create your own examples sentences, then try them out when you next get an opportunity to speak in Spanish.

I understand the reason ser occurs so frequently is because of the following types of examples (it has never been…):

English: It has never been so easy to talk to people in other countries.
Español: Nunca había sido tan fácil hablar con gente en otros países.

English: I had done it many times before, so I did not think about it.
Español: Lo había hecho muchas veces antes, así que no pensé en ello.

English: They were happy to see me because they hadn’t seen me in months.
Español: Ellos estuvieron contentos de verme porque no me habían visto en meses.

English: I didn’t believe that he had told me the true story.
Español: No creí que me había dicho la historia real.

English: I couldn’t remember what to do even though he had told me twice.
Español: No podía recordar qué hacer a pesar de que me había dicho dos veces.

English: We had to clean the house before going out.
Español: Habíamos tenido que limpiar la casa antes de salir.

English: I already had plans when you called me.
Español: Ya había tenido planes cuando me llamaste.

English: I didn’t know they had already arrived.
Español: No sabía que ya habían llegado.

English: This afternoon I went for a run, but I had already taken a walk this morning.
Español: Esta tarde he corrido, pero ya había dado un paseo esta mañana.

English: It surprised me to see the gift because they had already given it to me last year.
Español: Me sorprendió ver el regalo porque ya me lo habían dado el año pasado.

English: She told me that they had gone to the beach.
Español: Ella me dijo que habían ido a la playa.

English: I couldn’t see my friends because they had already left.
Español: No pude ver a mis amigos porque ya se habían ido.

English: I wanted to say something, but the moment had passed.
Español: Yo quería decir algo, pero el momento había pasado.

English: It was obvious they had had a good time.
Español: Era obvio que lo habían pasado bien.

The Spanish past perfect tense is not an easy tense to get used to. But, it is a good tense to practice as you level up your Spanish.

Choose some of the verbs from this post and try them out with a Spanish friend.

What else can you say using the Spanish past perfect tense? 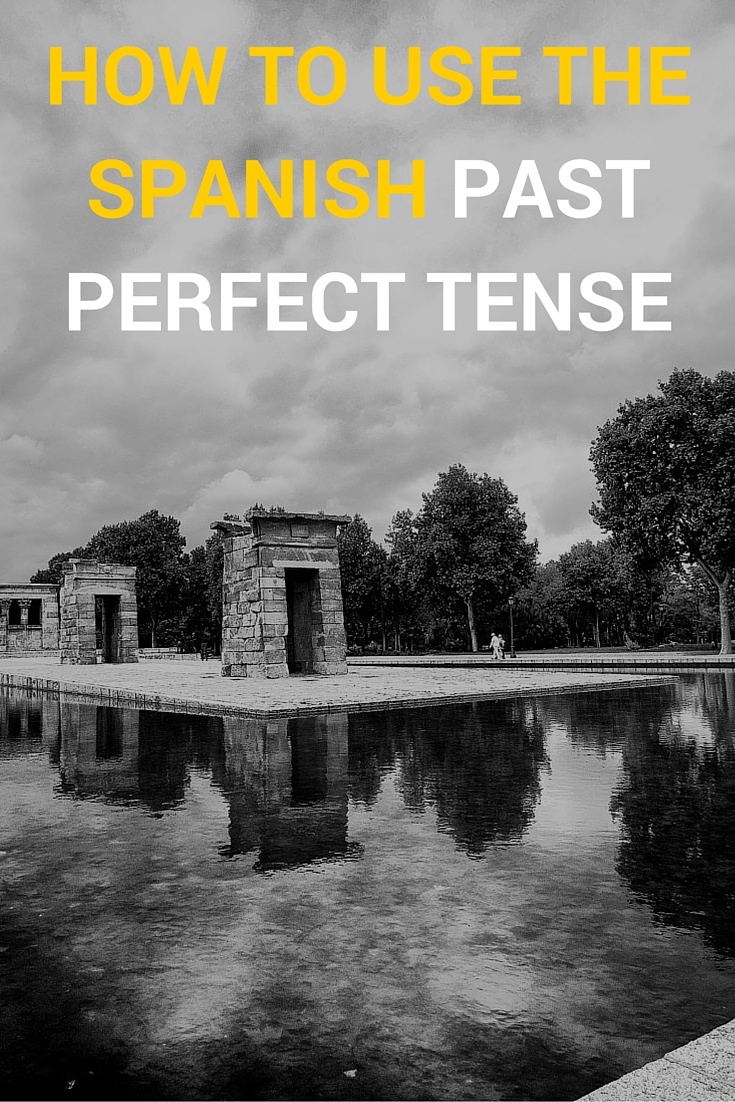